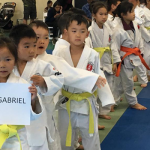 Our Beginner Class is a FUNdamental judo class that is designed to give every student a good taste of Judo and the Japanese culture, while also teaching them how to throw and fall safely. 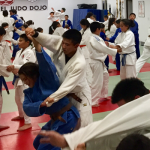 Our Intermediate Class is geared to teach traditional Judo as is taught in Japan with the utmost concentration on personal development of mind, body and spirit. We build good citizens, good community, good people through mutual respect, welfare and benefit. 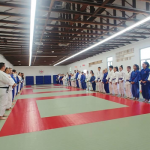 Our Advanced Class is focused on competitive Judo under current International Judo Federation rules. We have the best coaches and trainers in the country that vigorously push to build the best competitors each of our students can be. Come ready!

$75 per judoka
+ $60 for each additional family member

$35 and up depending on size

$15 and up depending on item
Please see Club Administrator 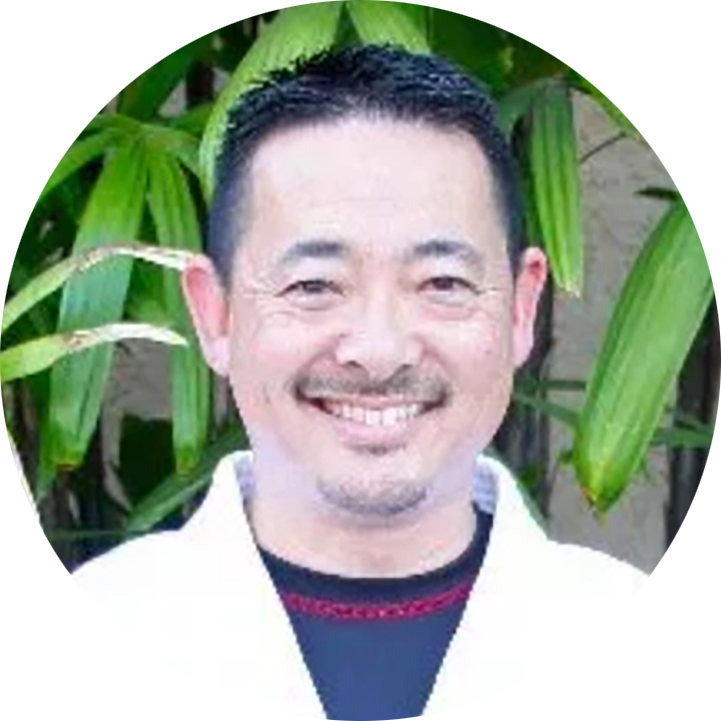 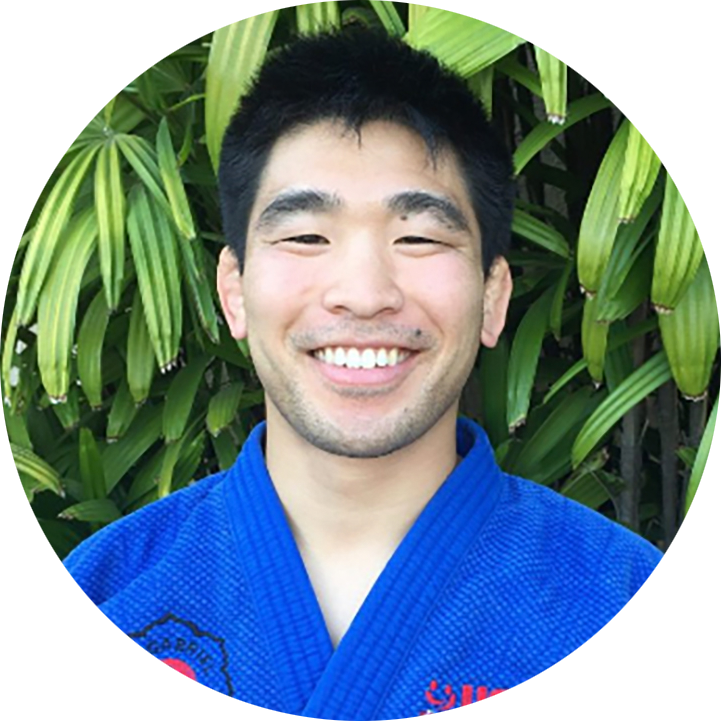 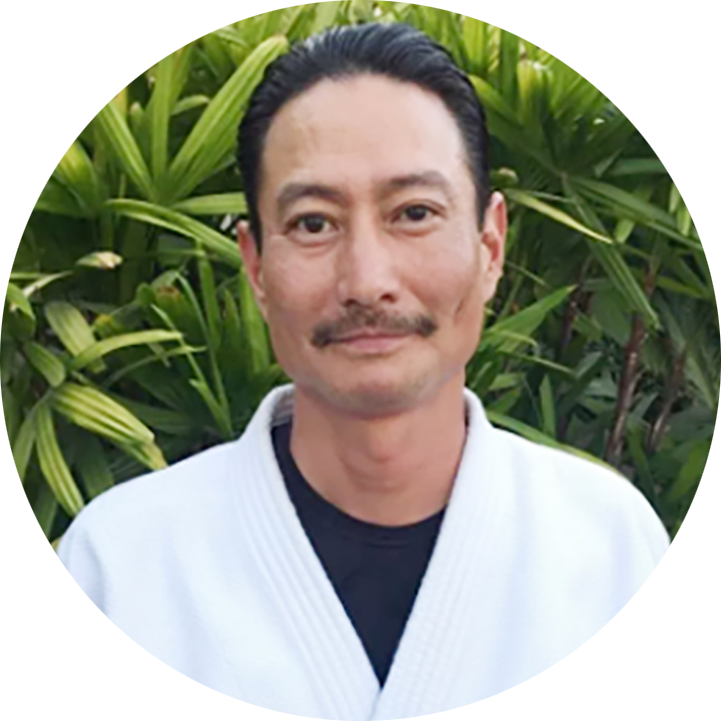 Etiquette is an important part of the sport of judo. Players are expected to respect their practice partners, opponents, their instructors, coaches, and the referees and officials at tournaments. Our respect for others in judo is expressed through our actions and words. These specific actions are expected of a judoka. The following description of San Gabriel judoka’s expected actions is provided as a guide for the player, parents and spectators to better understand proper judo etiquette. Other dojos may vary in some details.

We bow before entering the practice mat. If we must come in late we bow to the head instructor and wait at the edge of the mat for the instructor to invite us to participate. At the beginning of class we stand in line facing the instructors. We stand in order by age category and within each category by rank. The age categories in judo are Yonen (12 years and under), Shonen (13 to 16 years) and Seinen (17 years and above). Higher ranks within each age category stand on the left with lower ranks to the right.

At the start of class the instructors (senseis) seiza first then the students seiza starting from the left to the right. Class is called to attention “kiotsuke”. We perform a kneeling bow at the command “rei”. Class proceeds with warm up exercises.

When beginning practice with a partner we humbly request the honor of practicing with them “onegai shimasu”. After finishing with this partner we thank them “domo arigato.” No gum, food or beverages are permitted on or around the mat. There are two acceptable ways to sit in class. The first is sitting on the knees (seiza). The second is sitting cross-legged. These methods of sitting will be demonstrated in the beginners class. Always walk around or behind the instructors and classmates during class. Make sure that your fingernails and toenails are trimmed and filed so as not to cut or injure your opponent. Good hygiene is an essential part of good judo etiquette. Make sure your gi (uniform) is clean and the player is clean also.

At the conclusion of class we will line up again. The class will be called to attention “kiotsuke” followed by “mokuso”. “Mokuso” is the command to close your eyes and begin a form of meditation breathing intended to lower the heart rate. It is performed by breathing in for a count of seven through the nose, holding the breath for a count of seven and then slowly breathing out through the mouth. At the conclusion the sensei announces “yame” to end the breathing. This is followed by a command to bow “rei”. The command “jyozan-ni-mukate” means to face the place of honor (“joseki”). Once again we bow at the command “rei”. We turn again to face the instructors and conclude the class by bowing as we thank the instructors by saying “domo arigato.”

In the Japanese culture bowing is routinely performed as a sign of greeting and respect. In judo we perform two types of bows, standing and kneeling. Bowing is done when entering the dojo, entering or leaving the mat, at the beginning and end of class, before and after practicing with a partner and at tournaments at the beginning and end of each match. At the end of the class we turn and face joseki, the “higher end” of the dojo and bow towards the picture of Professor Kano. This bow is a sign of our respect for the founder of judo. In tournament we bow before we enter the contest area, we bow once more at the line then step forward and the contest begins. At the end of the contest, we step back to the white line, bow to our opponent again and bow a final time as we exit the contest area.

1. Be on time
2. Ask the head instructor of the dojo you are visiting for permission to participate
3. Ask about and pay any required visitors fee
4. Greet all Senseis on the mat and have a humble attitude – you are there to learn
5. Work hard
6. Remember you are representing San Gabriel Judo Dojo when you visit, be respectful.
7. Thank the head instructor and any other instructors after class has ended 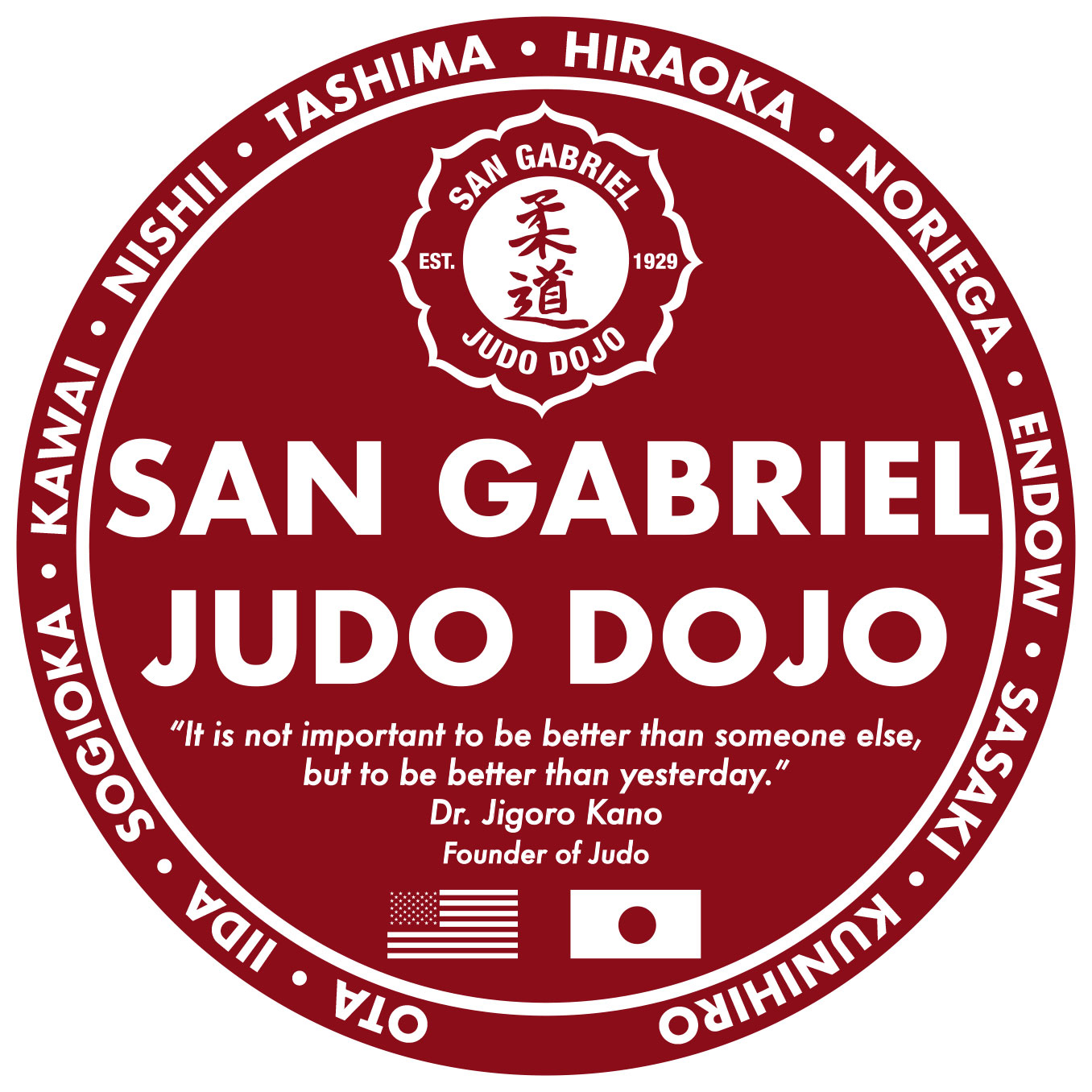 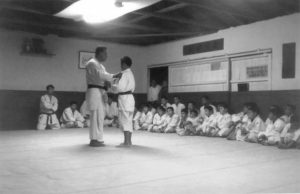 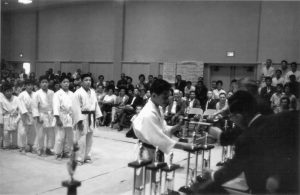 In 1932, the leadership transitioned to Tadasu Iida sensei, who was a school teacher and head sensei at the Coyote Pass Dojo in Monterey Park, California and Hollywood Dojo in Hollywood, California. Under Iida sensei’s guidance San Gabriel Dojo hosted many notable tournaments in Little Tokyo, Downtown Los Angeles.  The strong San Gabriel Seinen team were well known for having many judoka who were brothers. The Okumura brothers (Tsuyoshi, Takeshi and Kowashi), the Babamoto brothers (Toshio and Takeshi), and the Munekiyo brothers (Masato and Hideo) were exciting to watch.

San Gabriel Dojo was disbanded due to World War II and all of it’s members evacuated the area to be entered into Internment Camps.  Iida sensei was taken by the FBI due to being a well known educator in the issei/nisei communities. His whereabouts was not known.  Kawai sensei was sent to Manzanar where he assisted Seigoro Murakami and Shigeo Tashima with the Manzanar Dojo that was reported to have over 400 judokas in August 1942.  Sogioka sensei was interned at the Heart Mountain, Wyoming Relocation Center where he started the Heart Mountain Judo Club with Kikuchi sensei from Sawtelle Dojo and Inouye sensei of Seattle Dojo.

After World War II, as Japanese Americans returned to Los Angeles from the internment camps, most had very little to come home to.  With lots of hard work, Sogioka sensei was able to recover 5 acres of his family’s Baldwin Park land from a trust the property was in during the confinement period, and raised crops that would mature within 90 days that could be easily cashed.  As the Sogioka family’s economics improved, Sogioka sensei and Kay Kawai sensei reestablished the San Gabriel Judo program.  Kimura sensei relocated to San Francisco, where he organized the San Francisco Judo Institute.  Kimura sensei was inducted into the United States Judo Federation Hall of Fame in 1993.  Kimura sensei passed away in 2001 as a 9th degree black belt.

In the early 1950’s, Sogioka sensei and friends started developing the East San Gabriel Japanese Community Center on land that was deeded from Nobuo Sera and Chiye Hashimoto Taneguchi.  In 1958, Sogioka sensei opened a sister dojo to San Gabriel Dojo with Ed Kitamura, Masaru Harada, Keiji Horiuchi and Renzo Shibata, and named it West Covina Judo Dojo. At that time, Kawai sensei carried on the duties at the head sensei.  Soon thereafter, Kawaii sensei convinced the recently retired San Gabriel Judo competitor, Kikuo Nishii to become the head sensei with Kawai sensei as his mentor and advisor.  Nishii continued to be the head sensei until 1967 when he decided to start a family with his wife, Ernie Jane, daughter of legendary Ryusei Inouye sensei, the founder of the great Senshin Dojo in Boyle Heights, California and Downey Dojo in Downey, California. 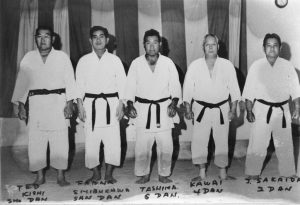 At that time, Kawai sensei recruited his good friend from the Manzanar Judo program, Mr. Shigeo Tashima sensei to be the next head sensei.  Tashima was the head sensei at Norwalk Dojo and he also advised instruction at Gardena and Hollywood Dojos. Tashima sensei sponsored an exchange program with Japan and brought many champion level judokas to America like Tadashi Hiraoka, Yasuhiko Nagatoshi and Renzo Shibata.  Kawai sensei continued to be an advisor and big supporter to the program. 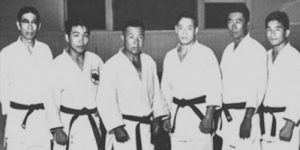 In 1974, Tashima sensei selected Tadashi Hiraoka to become the head sensei.  Hiraoka was born in Fukuyama, Japan and was the team captain at Hosei University.  In the United States, Hiraoka won the iconic title of Grand Champion in 1968 and 1969.  Which means he was the national champion of his weight division, then he took on the champions of all other weight divisions and defeated them all to be named Grand Champion.  Only a very, very few individuals have ever made this accomplishment.

In 1988, Shigeo Tashima sensei received one of the highest honors from the All Japan Judo Federation, the sacred Gold & Silver Rays Medal for his lifetime contributions to Judo in America.  On March 4, 1993, Tashima sensei passed away at the age of 77 and the rank of 8th Degree Black Belt.  He was remembered as the all time Giant in American Judo.  Soon after Tashima’s passing, Hiraoka sensei started to transition the leadership of the dojo to Mike Noriega to become the Head Coach of the dojo and the next the Head Sensei.  Noriega was a locally raised judoka who started judo with Tashima sensei and received his 1st Degree Black Belt in 1976.  Noriega became a phenomenal sensei for the dojo developing several champions as well as strengthening the financial status of the dojo with several lucrative fundraising ideas.  With the assistance of coaches, Butch Ishizaka and Alan Shimamoto, San Gabriel Judo placed 3rd in the 2003 National Championships.  In 2004, Noriega was named Coach of the Year by the United States Judo Federation and officially became the Head Sensei of San Gabriel Judo.

After serving the Dojo for nearly 20 years, Mike Noriega recruited Richie Endow from San Fernando Dojo to be his successor as head sensei.  In December of 2013, Endow officially became the Head Sensei of San Gabriel Judo Dojo.  Under Endow sensei’s direction, the club’s membership boomed to over 100 students and the program produced several local, state, and national champions as well as several certified coaches and referees.  In 2019, Endow sensei was nominated as Coach of the Year by USA Judo after San Gabriel Judo entered over 60 competitors in the National Championships and qualified several San Gabriel Judokas to represent USA in Dominican Republic, Ecuador, Portugal and Guadalajara, Mexico.  These U.S. representatives returned with the following international medals:  1 Gold, 2 Silvers, 1 Bronze. 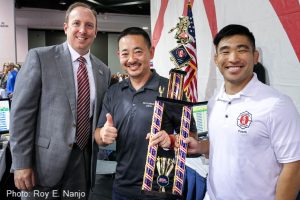 On January 1, 2020, a new era was born with a new Head Sensei Trio team, which is composed of Richie Endow, Taizo Sasaki and Aaron Kunihiro.  Presently, San Gabriel Judo has grown to over 145 members and has consistently placed in the top ten Judo Dojos in the country producing many national and Pan American medalists.

A FEW FACES OF OUR DOJO 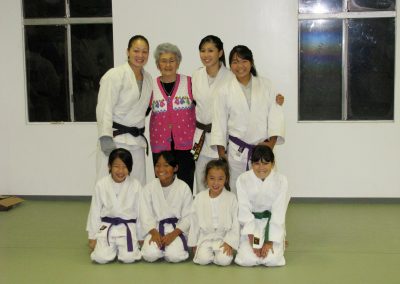 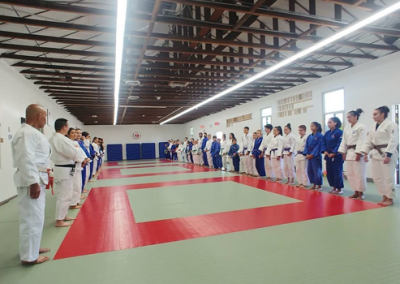 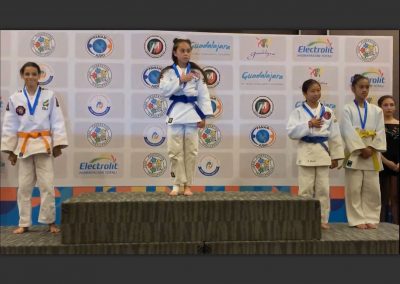 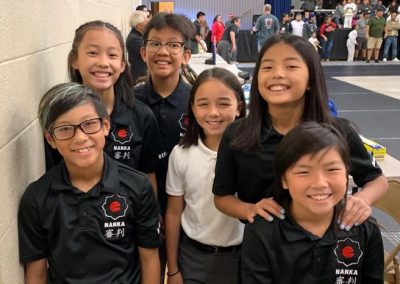 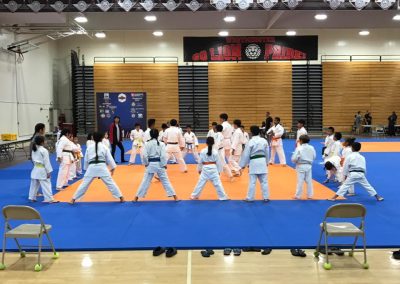 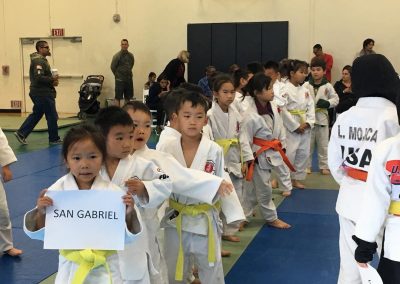 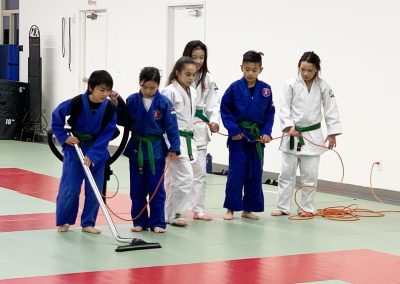 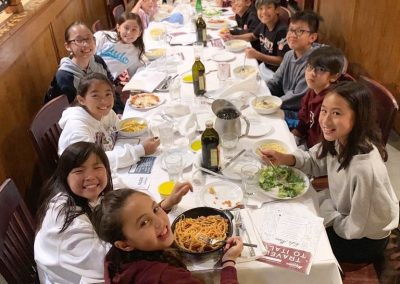 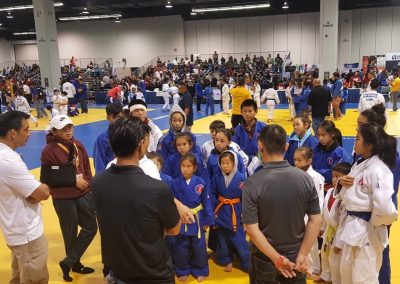 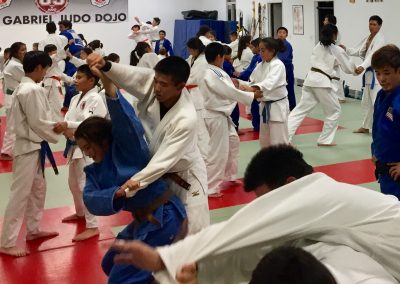 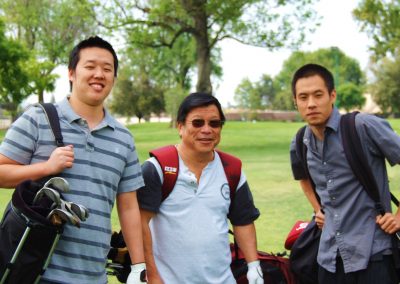 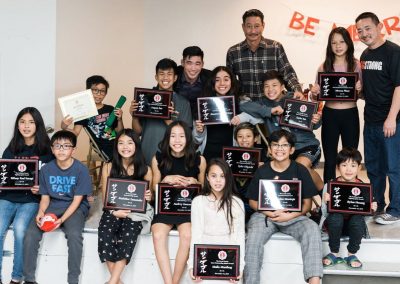